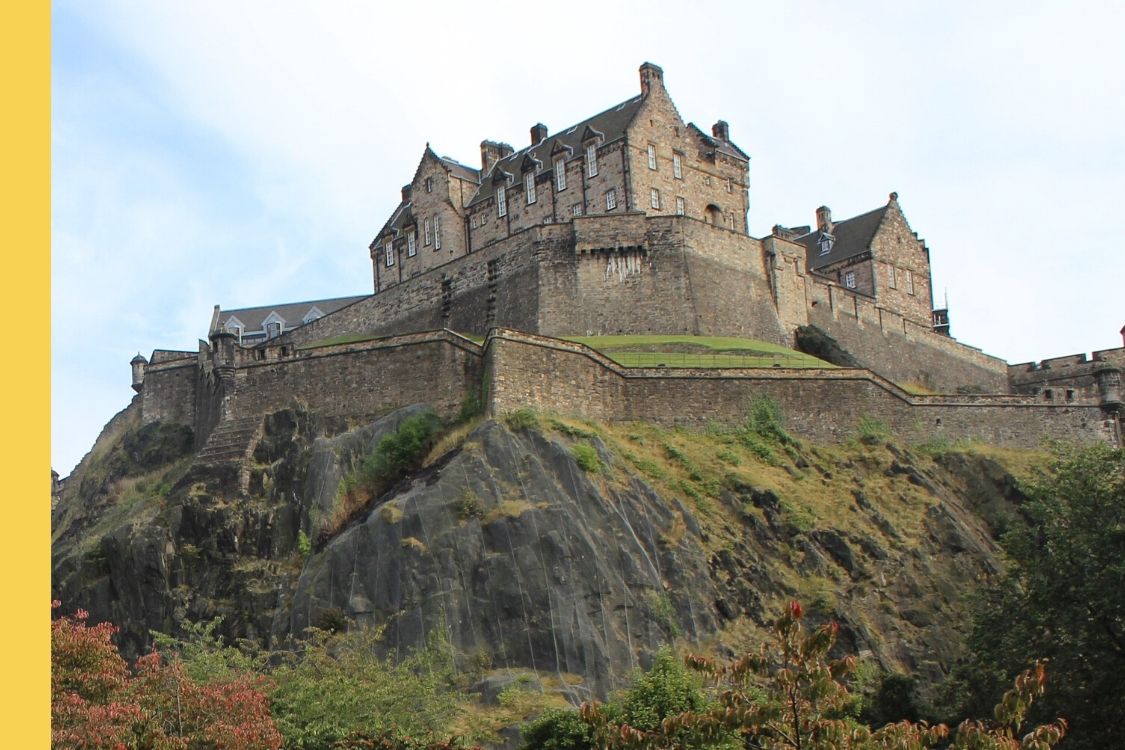 Edinburgh Castle has stood high above the city since prehistory.

Today, the iconic Scottish landmark shares in its fairytale with all who wander through its towering entrance.

But what if the story given to us is only part of a bigger mystery waiting for the curious traveler in us to discover?

From prickly thistles to a pet elephant, here’s a good collection of Edinburgh Castle legends we think you’ll enjoy.

1. The Stone Of Destiny Actually Belongs To Perth City.

Amongst the dazzling display of crown jewels at Edinburgh castle sits a rather unusual object.

The Stone Of Destiny (also known as the Stone Of Scone) has been used for centuries to crown Scotland’s Kings and Queens in the ancient capital city of Perth.

Here, the royals would be seated on a chair with the Stone Of Destiny embedded below as they underwent their coronation ceremony.

Until one day, In 1296, when King Edward I took the stone as spoils of war to Westminster Abbey, where it was fitted into a wooden chair—known as King Edward’s Chair.

It wasn’t until Christmas Day, 1950 when a group of 4 students snuck into Westminister and took the stone away with them.

During their travel back to Scotland, the stone broke in half.

Eventually, it was repaired in Glasgow and handed over to the church of Scotland before finding its new home in Edinburgh castle alongside the crown jewels.

Today, the people of Scotland are petitioning to remove the stone from Edinburgh and bring it back to its rightful home, the ancient capital of Perth. 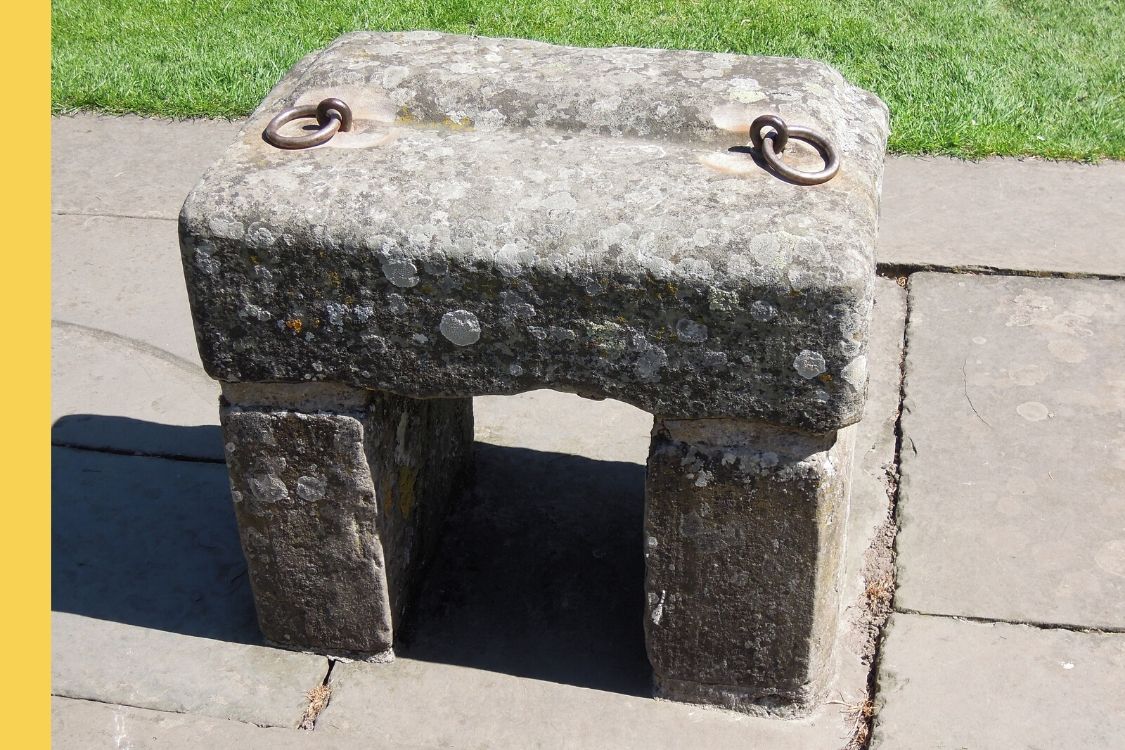 The castle sits in a ‘hot’ spot, but not to worry, the last time that the 130m high volcano exploded was over 340 million years ago. Thankfully, nobody was around to witness such an event.

Evidence suggests a settlement has existed on the volcanic rock, also known as ‘the plug,’ since at least 850 BC.

By the time the 12th century came around, it was time to erect the castle we know and love today, and there was only one place to build such a fortress.

We want to think that the architects must have been pretty confident that the long-dormant volcano won’t blow its lid again… right?

Are you looking for the best place to stay locally within Edinburgh city center?

Be sure to check our video guide on Edinburgh’s Castle Rock Hostel and consider making this your place to stay. 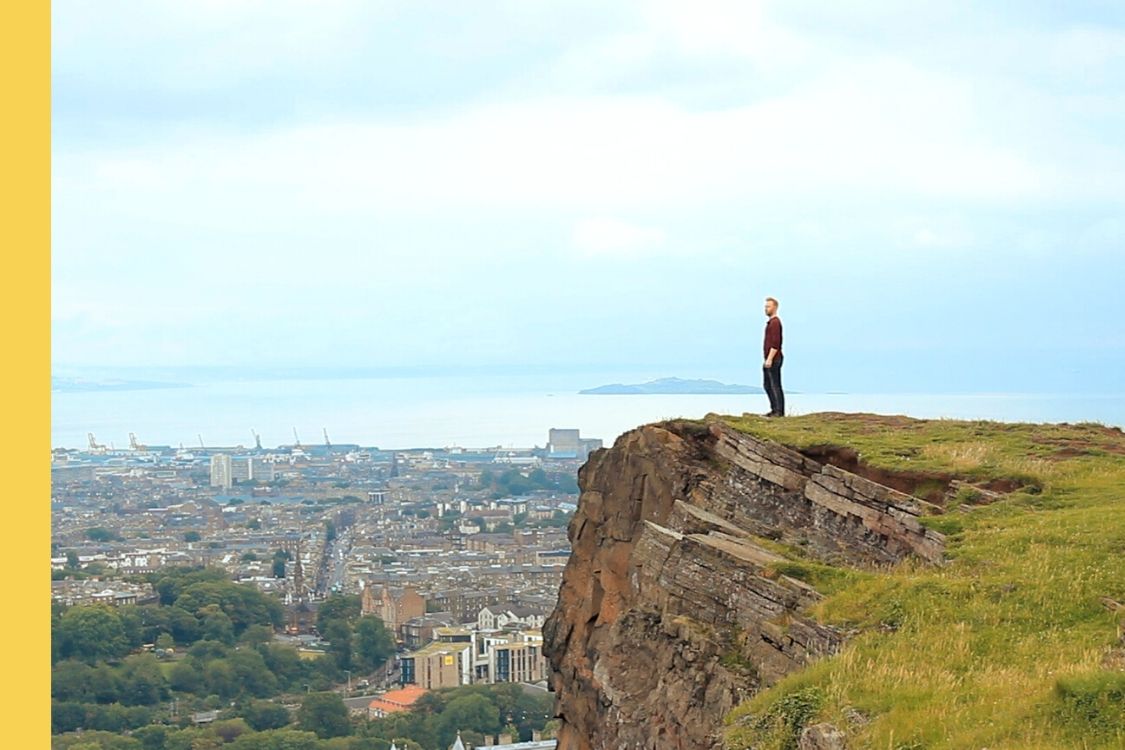 3. There’s A Hilarious Story Behind The Castles’ Latin Inscription.

According to legend, the “guardian thistle” played a vital part in Alexander III, King of Scots’ defense of the ancient realm of Scotland against a night-time raiding party of ‘not-so-sneaky’ Norwegian Vikings.

One or more of the Viking raiders let out a yell of pain when stepping on a prickly thistle, which alerted the Scots and saved them within an inch of their lives.

In the motto, “No one harasses me without punishment in return” (Latin: “Nemo me impune lacessit”), “me” was therefore originally the thistle itself, but by extension now refers to the Scottish regiments which have adopted it.

Could a country’s relationship with nature get any closer than that of Scotland and its thistle?

Be sure to plan ahead for your visit to Edinburgh Castle.

Explore Edinburgh Castles official website, plan your trip and bookmark this link for when it comes time to purchase your castle tour tickets.

And don’t forget to let us know how your trip went!

4. The Castle Royals Are Knights To The Order Of The Thistle.

Such a cool name, right?

It makes us feel like we’re inside the exciting world of Game Of Thrones.

Legend has it that during the battle of 786 with Angles under Aethelstan, the cross of St Andrew appeared in the sky to Achaius, King of Scots.

After his victory, he established the Order of the Thistle and dedicated it to Saint Andrew.

However, the second theory in this tale relates to Robert The Bruce.

Some say that it was, in fact, he who formed the order after his victory at Bannockburn in 1314.

The order consists of 16 ‘Knights’ and a handful of ‘extra’s.’

The ‘extra’s’ consist of the Royal Family, and the group is said to be above the government.

The order’s official emblem is the Thistle, Scotland’s national flower.

Their motto, the Latin inscription above the entrance to Edinburgh Castle, translates to, ‘No one harasses me without punishment in return.’ 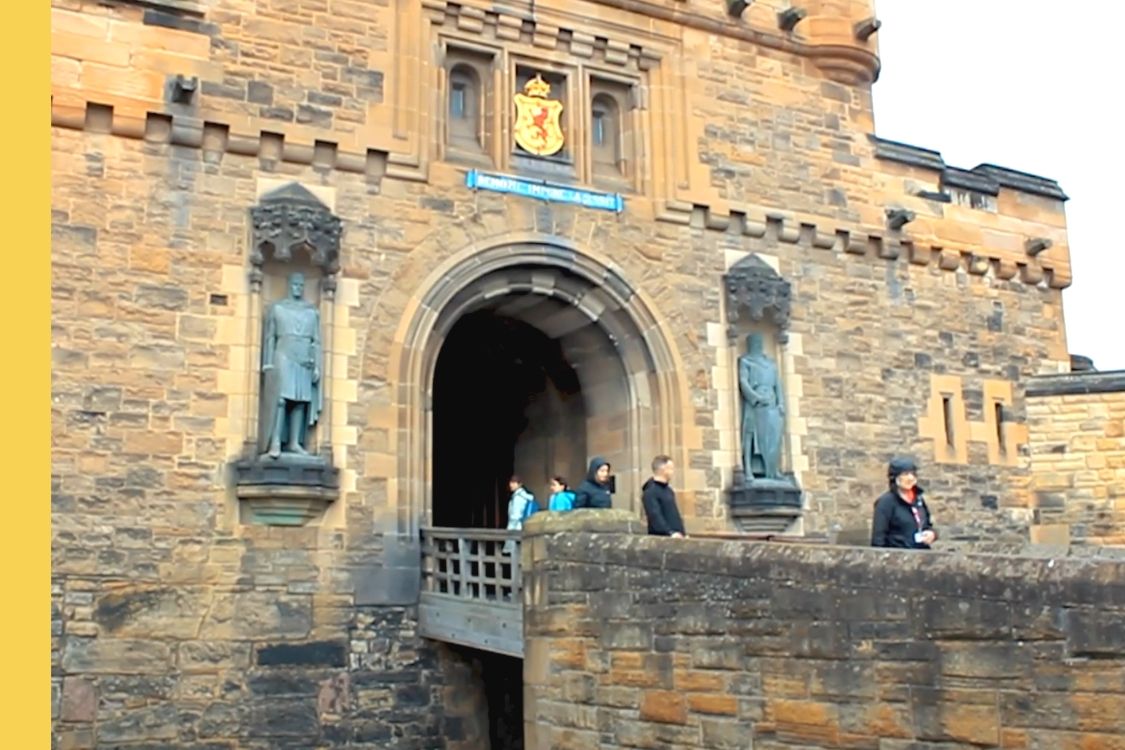 5. The Elephant That Loved A Wee Dram… Or Two!

We’re not trying to pull your trunk – in 1838; the 78th Highlanders returned to Edinburgh after a long posting in Sri Lanka with a full-blown elephant.

As the castle was one of the main infantry barracks, the elephant lived onsite with his comrades and became the head of their marching band.

He also developed a passion for beer and is said to have reached his trunk in through the canteen window for a pint before bed.

His toes are currently displayed in the National War Museum within the castle grounds.

Let’s Take A Wee Virtual Tour Of The Castle.

This imposing symbol of Edinburgh, the home of Scotland’s kings and queens for centuries, has witnessed royal births, medieval pageantry, and bloody sieges.

Today it’s a complex of various buildings, some dating from the 12th century, linked by cobbled roads that survive from its more recent use as a military garrison.

Be sure to discover more about Edinburgh Castle, have a go at planning your trip, and bookmark this link for when it comes time to purchase your castle tour tickets. And don’t forget to let us know how your trip went!

For more information on how to get here, have a look at the various travel options that are available to you.

If you’re a student who is traveling on a budget and you prefer your accommodation to be in walking distance (literally 1 minute walk) of Edinburgh Castle, or you just want to get back into one of the best ways to travel locally within a town or city then be sure to check out our video guide on Edinburgh’s Castle Rock Hostel, browse their official website, and consider making this your place to stay.

6. For The Bad Guys, The Castle Was Often The Last Thing They Laid Eyes On. Any Last Words?

The Grassmarket is located directly below Edinburgh Castle and is a historically popular market place and event space in the Old Town of Edinburgh.

The Grassmarket was also the traditional place for public executions.

The locals in Edinburgh like to talk about the story of Margaret Dickson.

She was a fishwife from Musselburgh who was hanged before an audience in the Grassmarket in 1724 for murdering her baby shortly after birth.

After the hanging, her body was taken back to Musselburgh on a cart.

However, on the way there, she awoke.

Since, under Scots Law, her punishment had been carried out, she could not be executed for a second time for the same crime.

(only later were the words “until dead” added to the sentence of hanging).

Her “resurrection” was also, to some extent, seen as divine intervention, and so she was allowed to go free.

In later life (and legend), she was referred to as “half-hangit Maggie.”

There is now a pub in the Grassmarket named after her.

7. The Castle Was Once Under English Rule.

Edinburgh Castle has faced down hostile forces an incredible 23 times, making it the most embattled fortress in Europe.

Even the king of Scots, Robert The Bruce has had to invade his own castle to release it from the grip of the English King.

Notable instances include the Longshanks Siege of 1296, when Edward I plundered the castle and shipped all its treasures to London, including the Stone Of Destiny.

There’s also the Lang Siege, which resisted government forces (even as the castle suffered a water drought) from 1571-73.

The last siege was during the 1745 Jacobite Rising, when Bonny Prince Charlie tried – and failed – to take the fortress.

Other than its daily deluge of tourists, the castle has enjoyed a quiet life since. 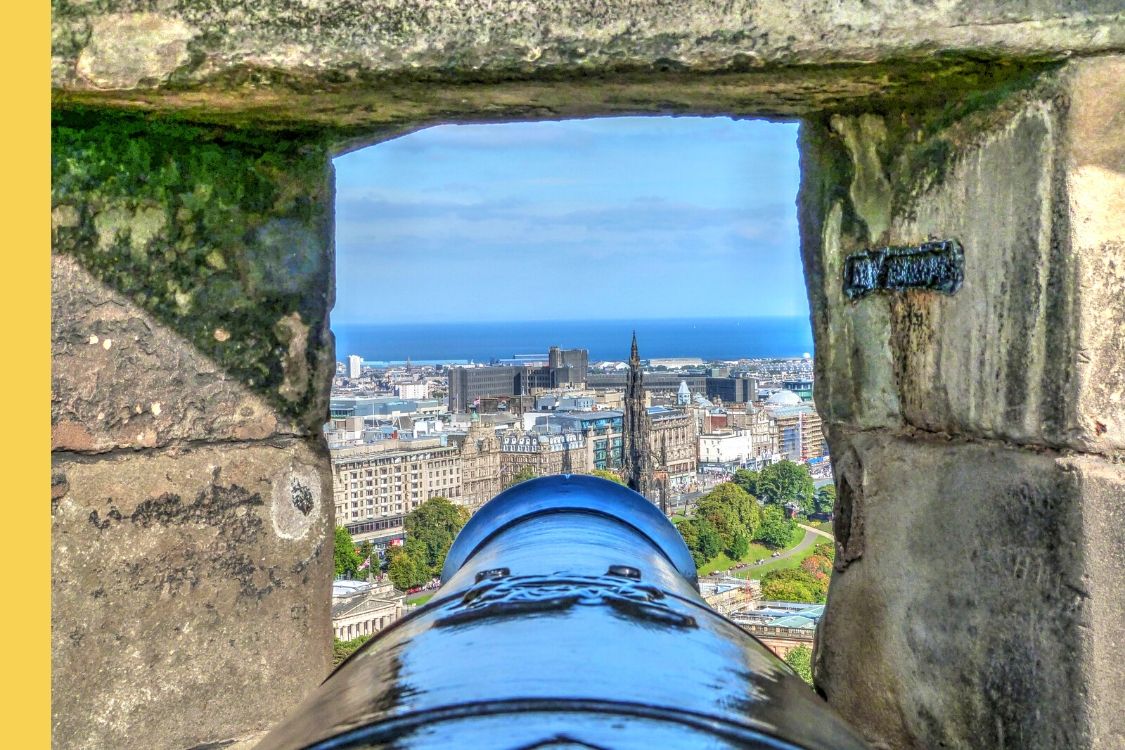 8. Sailors Rely On The Castle To Tell The Time. Ahoy, Its 1pm!

In the days before iPhones, sailors on ships passing through the Firth of Forth would keep their ears peeled for an unmistakable booming noise coming from Edinburgh Castle at the same time every day.

The shot made from the original 18-pound gun would be heard for miles, and allow the sailors to adjust and reset their chronometers to the correct time.

Though its timekeeping duties are no longer required, a gun continues to be fired from the castle’s battery as a beloved tradition every day.

9. Lurking Beneath, The Ghost Of The Lone Piper Still Haunts The Castle Tunnels.

Legend goes that hundreds of years ago, secret passageways running into different parts of Edinburgh were discovered underneath the castle.

A young piper was dispatched into the tunnels and instructed to play his pipes as he walked, so that people above could map out where the subterranean passages led.

However, his playing abruptly ceased, and when they went into the tunnels to find him, no trace of the young piper could be found.

It is said that his ghostly piping can still be heard beneath the castle to this day, waiting to be rescued… 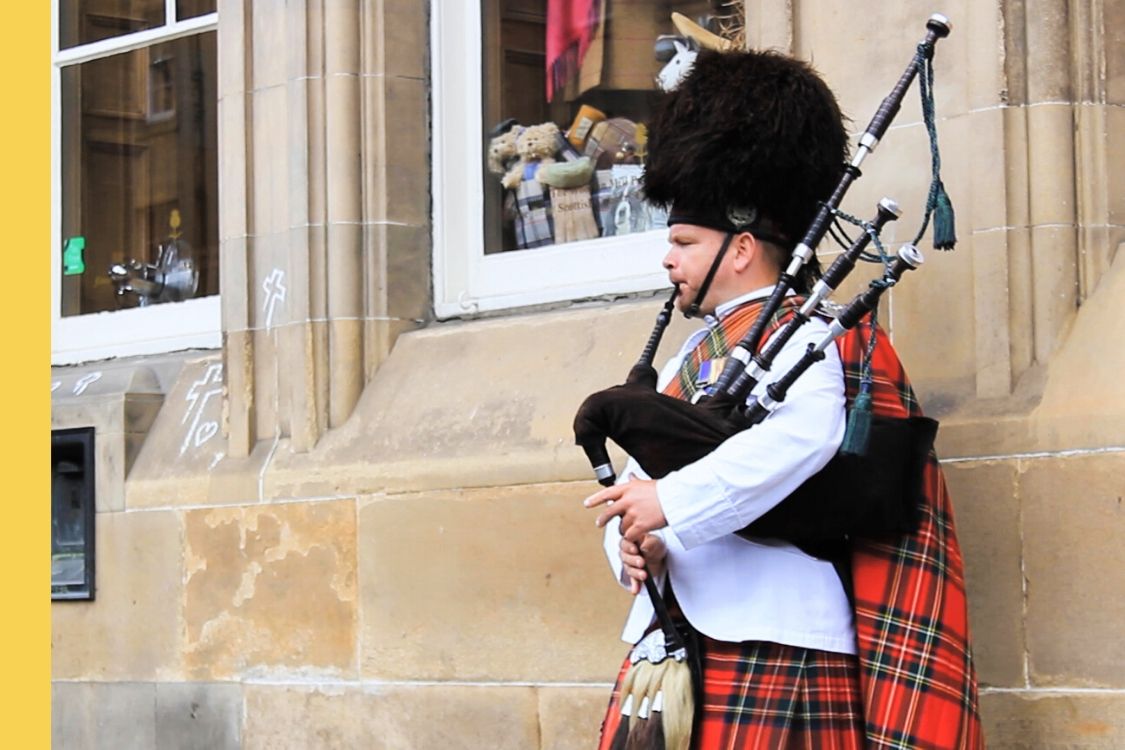 See Edinburgh for yourself In this episode. we explore the cultural heart of Scotland.

A journey through Scotland means there's no knowing where your feet may take you.